Picture this, if you will……. a beautiful *princess has been released from the shackles (a restricted budget and rocketing rental prices), that have kept her prisoner in a darkened dungeon for three years, (a first floor flat over a bar in the Gotic). She had been waiting, with so much hope in her heart, that someone, anyone might have seen and read the **note that she had sent out into the night on the back of a winged messenger. But sadly, no word had reached her from those on the outside….. she had resigned herself to a life of darkness with the sounds of hell bellowing in her ears, and the idea that she might become an actual vampire. Or develop rickets. 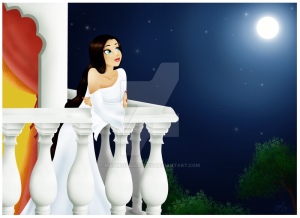 One day, as she was sweeping more cobwebs and dust, than anyone would think feasible for a tiny person in a mere week, and gathering in her dustpan, hair balls the size of small mammals – she received a heartening ***sign from her fairy godmother. It spoke to her of a prince who would vacate his ivory tower in search of riches in far-away lands, leaving the palace vacant, for someone who would cherish it as he had. With a skip in her step and a song in her heart (and a bin bag full of floor dirt), she snuck out of the dungeon to visit the prince and tell him of her plight and her hopes for a new beginning – she also went to see the estate agent to make an offer. But her evil captors caught wind of this shenanigans and began to assert their authority by threatening to withhold the little money she had, to limit the chances of her escape. But undeterred and with a new sense of purpose and new-found strength, she faced them head-on (by cleaning and painting everything so as not to anger them still further)……. because she could finally see the light at the end of the tunnel. The ****prize was within her grasp. And so, with help from a trusted friend she finally made her escape, with a smattering of possessions and her deposit in her pocket; to begin the next chapter of her story.

And so here we are, three weeks after her daring get-away, and forty-eight hours after her final battle with her captors. We see our modern day Rapunzel – but with short grey hair not even strong enough to handle a gerbil, let alone support the weight of a fully grown man (person) – gazing out over her new kingdom from the fifth floor balcony. She’s been there more or less the whole time in her beautiful *****nightgown, since returning the enchanted (rusty) keys, that had held her under their spell for so long. Now she could wait, peacefully, for her Prince Charming to arrive. If Prince Charming was the Just Eat guy. Happy and contented she looked upon the super moon, and wished on the first star she saw, for more good things to happen. And with a strange kind of certainty that they would………

***whatsapp from a friend

****little flat in the Eixample

3 thoughts on “Fairytale of Barcelona”