I didn’t really want lock down to end. There. I said it. I kind of liked it. Except for the poverty and desperation.

I want to do the things I should have done the first time round. I had plans. Big plans. (Loathe to admit it as I am, the Twitter, discipline millionaire dude was kind of right – we might not be gifted this time again). Damn him. I was going to write, set up a website, blah, blah. Of course, I didn’t expect the lockdown to last quite so long. I don’t think any of us saw that coming. I took out a small, cheap loan to see me through a month. Two months later, I was getting creative with dried pasta and a stock cube and looking at the *cat funny.

When I started to feel better, I thought, ‘Right! Time to emerge like a beautiful butterfly.’ I planned to exercise daily. I came out the other side like a moth. One of those massive, hairy-ass ones that scares the living bejeezus outta ya. Never mind the Llandudno goats, nature has well and truly returned – on me. Razor, scissors, nail varnish? Do me a favour. I’ve gone feral.

I lost, I’d guess, three/four kilos during the five weeks I had and was recovering from the virus. I don’t have scales, because I never want to see the numbers. I’ve gained god knows how much in the time since. I mean, sweet, bouncy Joe Wicks was leading seven million people around the globe, daily, in his PE with Joe. Free.

I wasn’t one of them.

The sense of optimism was buoying. People kept bandying around words like ‘reset’, ‘reboot’ and ‘restart’. All the REs. We showed love and appreciation for really important people. The daily clap for healthcare workers was the highlight of my days. I cried almost every night. I felt connected. It was beautiful. Damn! I even got to meet neighbours across our balconies and across the street during those moments, I hadn’t seen or spoken to before.

I liked the idea of finding other ways to communicate. There was the elbow bump, some suggested a polite bow, as the Japanese. I have pretty much embraced the curtsy. To be fair, it’s something I’ve been trialing for some time, along with formal greetings such as ‘Miss T’, ‘Sir’ and ‘Lady F’. Now I had the perfect excuse to roll it out formally.

– watched one movie. Concentration didn’t (doesn’t) even extend to a paltry 90 minutes. World War Z might not have been my best decision given that 2020 could literally present anything and I probably wouldn’t blink. ‘Zombies?! ^throws up arms^ Of course, it’s 2020.’ It could have been worse, it could have been Contagion. I mean, there’s a poor choice when you’re actually living a global pandemic. #1 on Netflix. Human beings are very weird.

– read one book. I took Adults to the hospital with me as I’d been warned it could take some time. By the time I was discharged 30 hours later, between the jabs and wires and swabs, I’d read 90% of it. It kept me sane and distracted. That was the end of March. I finished it on Saturday this week. 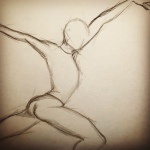 – did one sketch. I saw a lovely black and white photo of a dancer. I liked his lines. I thought, ‘that’s nice’, got my pencils out, sketched it, popped everything away and posted it on Instagram. It got 30 likes. It’s not surprising really. Looking at it now, it’s clear to see, it was very much half-arsed.

– attended one protest. A peaceful gathering with a talk, taking the knee and Martin Luther King’s I Have a Dream speech. I cried. Again. We were one.

– attended one online chat with a comedian and a writer.

– watched one series from the pilot to the finale.

Although this list is more extensive than I thought it would be when I started writing it, when you add up the actual hours (with the exception of the series) it pretty much equates to the time it takes to blink.

I discovered that PEOPLE HAVE STUFF IN THEIR HOUSES THAT THEY DON’T EVEN IMMEDIATELY NEED. Like flour and **baking powder and saucepans.

I want us to have more time. It feels like the inspiration we found in our shared humanity is already slipping away. Our appreciation of glimpses of nature, a life less rushed, more peaceful, more valued, an opportunity to make changes. Things are returning too quickly to the way they were; even quicker than I thought they might. In the time it’s taken Edward Enninful to turn around his ‘Reset’ August edition of Vogue, people have already forgotten to what he refers. My anxious self is bracing for no longer having lockdown as a valid reason to take it easy.

In one of the first returning classes I had online, I hazarded a guess that it would be six months before it was a hazy memory for most. One of my students said I was an idiot.

It seems he was right.

*I was not looking at the cat funny. Of course I wasn’t. I fed him before myself. I was the more likely of the two of us to be discovered with a half-eaten face. (Not restricted to global pandemics).

** I have this now to accompany the thermometer, glass water bottle and iodine in the cupboard marked ‘adult’.