Well, I don’t think any of us can deny, it’s been a wild ride.

Sitting with two friends in a cafe in London, back in January, there was much talk of new clients, new contracts and full diaries. Even after many, many years of saying, ‘let’s never say again, “this is going to be the year”‘ after literally all of those years fell flat; we said it.

Well, here we are. Three and a half months later, the global economy is bust, unemployment has skyrocketed and the vast majority of us have forgotten how to wear shoes.

A year from fifty, I had committed to not wearing pants and found myself without freelance work within a twenty-four-hour turnaround. With a newly approved consolidation loan, no savings, a lone ball of mozzarella in the fridge and a dry, scratchy cough; it wasn’t looking good.

A few days later, I casually text the WhatsApp group that had planned a Houseparty that I wouldn’t be able to make it, as I was in the hospital waiting for a Covid-19 test. I did a ring round of the inner circle to let them all know. I was all very matter-of-fact. If anything, I was mildly irritated. There’s a lot to unpack about my approach to serious illness that’s best broached with a professional.

Thirty hours later I was sent home with the drugs and an instruction pack about COVID pneumonia treatment and aftercare after battling against admission to the hospital on the grounds that I was already three weeks in to feeling ropey, past the worst, had got myself to the hospital and there were others more deserving of any beds that should become available any time soon.

I also cried about my cat being left in the house alone. I’m that woman now. I had slept for only two of the thirty hours and was so hysterical, a kindly medic, forever known as ‘Doctor Cat’, even offered to get a friend of hers to collect my keys and pop in to feed him. I was too ashamed of the mess to permit that to happen.

Well, it had been two weeks of only enough energy to shuffle from bed to sofa and receive Glovo takeaways.

There was a great sense of camaraderie as we all rallied. Online seminars, music and comedy gigs, covideo parties, series recommendations and art classes. We were connected through our shared cake efforts. Marie Antionette would have been proud, we were all bloody eating it. Group chats a-go-go with folk you might not chew the fat with on the reg and hadn’t spoken to since that disastrous school reunion in 2010. That happened once. There’s a reason we don’t maintain contact.

Weirdly, I hadn’t felt this calm since 1957. Jon Ronson mentioned in a tweet that maybe it was because those of us with anxiety had been preparing for this our whole lives. We were ready. I quote tweeted him. He liked it.

Then the fear set in. I was jobless.

Until I started to feel the knot of dread creeping in again, I realised that I hadn’t felt it for four whole weeks; and it had been blissful. They do say, you don’t know what you’ve got ’til it’s gone. It was a beautiful, calm stomach, clear head, peaceful night positive in the craziness. But here we were again. Sleepless.

start a side hustle

find a cure for Coronavirus

or donate any organs…

…or whatever the hell else the millionaire with no financial worries told us we should all do, over on the Twitter. He said we had no discipline. I said, ‘kiss my arse’.

The ex that I lived with in Liverpool text and asked if I was home. Eeerrrmm, aren’t we all? (Except the half a million people on Bournemouth beach, of course). Once that had been established, he told me he’s going to be a dad. So that’s two of my exes straight outta the Pank finishing school and into the arms of their baby mamas. ^curtsies^ 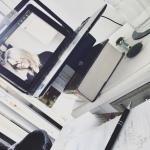 Work picked up again in May, thank all the gods for that small mercy, although it brings with it a raft of other concerns. I keep my jade eye roller to hand at all times because: Zoom. I’ll be recovering financially for the foreseeable future. I’m already bracing myself for a lean August and I’ve written the rest of this year well and truly off. I’ve made my peace with no trips and no visitors…. no drinks with the girls, dinners, sale shopping, house trinkets. Na. Da.

I am pretty gutted that I didn’t have the foresight to buy shares in zoom. I do, however, have an appointment with a new accountant and now own a thermometer, iodine and a corked glass bottle to decant my own filter water, so I guess that means I’m some kind of grown-up.