Considering that the last royal wedding happened back on the 29th of April 2011, the day after I was made redundant and discovered my boyfriend (who I lived with at the time) had been unfaithful, and that I’m not a big fan of the idea of me getting married again – I fully intend to embrace the pomp and circumstance and romance of someone else’s wedding today! Fuck you Walt Disney for doing this to me. *Screams into the void where princesses go to die*.

As I spent the last one downing two bottles of bubbles in my pyjamas on the floor of our flat in Liverpool, sobbing all over the Daily Mirror (don’t judge me) royal special-edition route-planner which was spread across the floor while wailing and howling – this one has been meticulously planned to not include any of those things. 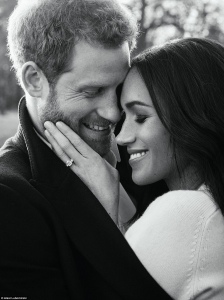 I’m not a royalist by any stretch of the imagination, (and I’m certainly not a massive fan of my home country right now, as you well know), but I am quite giddy to see the spectacle unfold. As a fellow shenanigator, Harry has long been my favourite of the Windsors….. those photos from Vegas – I mean, come on! One thinks sir might be a ruddy good egg (and totally awesome on a night out). All the japes.

And what’s not to love about their romance. ❤ ❤

ANOTHER WARNING: DO NOT PISS ON MY DEWY-EYED CHIPS – I WILL CUT YOU.

The boy whisked her to Botswana to camp under the stars for Christ’s sake…… *swoons all over the buggering place*. OK, that’s not within everybody’s realms of possibility I know (and in reality she probably needed to have a load of painful jabs in preparation), but I think if money were tight, he’d just as likely have shipped ‘er off to Canvey Island and seduced ‘er wiv a fish-n-chips supper, guv’ner. *doffs cap*. She’d have been just as bowled over, looking into his naughty twinkle in his eye……. eyes. (And also probably relieved she didn’t have a mild dose of malaria to deal with from the inoculation). She must have been doing bloody cartwheels when she returned to the set of Suits after that trip! So. Much. Romance. *I think I just did a little sick*……

The day won’t however, pass without the tiniest hint of sadness – as I mourn the death of the carefully orchestrated plan my sister and I hatched many years ago. That being to send her down to Chelsea, to hang around in the nouveau riche, rich kids’ playground that is Mahiki, casually bump into Hazza at the bar (or dance floor), apologise for her misdemeanour, locking her baby blues with his over a giant gazillion pound cocktail laced with gold leaf and the tears of angels; and get chatting to him – thus appealing to his ‘down-to-earth, one-of-us, man-o-the-people’ sensibilities. He would fall instantly in love with her, love meeting the fammly (Phil Mitchel voice) back in Welsh Wales and the rest would have been history. Then, she and I, who would of course become her lady in waiting, would commando roll around the corridors of whichever house she had been gifted by Lizzie, laughing and swigging Dom, the day of her wedding. After all the guests had left and the footmen had been dismissed for the evening, natch. We’re not animals.

Yes. I married my sister off in my imagination. Guilty as charged.

So, here I am with my breakfast of booze steeped, plump strawberries, a cup o’ cha and a glass of the fizzy stuff (this is perfectly fine behaviour for celebrations), ready to watch the sparkle and the ponies and the fancy clothes and the men in breeches. And the ridiculous fascinators. Come on Fergie’s girls, don’t let us down!! I bloody love a wedding, me, even if it isn’t people I know, and I will stop and gawk and cry if I happen upon one. Loiter, take pictures, throw confetti, you know – the whole shebang. So a few tears will definitely be shed as I chug back cava while celebrating a real-life fairytale. Absolute scenes. Again seriously, fuck off some more Mr D – I cannot stress this enough……

If I were you lovely readers, I’d be thankful I don’t live anywhere near you, and if I do – you definitely want to hope I never stumble upon your special day.

And on that (somewhat creepy) note, from all of us here at Pank Towers (one person and some plants), we (I) encourage you to raise a glass with us (me) and holler, ‘up yer bum Harry and Meghan!‘