So, I fell off the Tinder wagon, after claiming I was going dating ‘organic’, at the same time I hopped right back on the booze bus, after (Dry January and a half).  Still – more or less – sugarfree; I should be thankful for small, self-control mercies I suppose.

I also bought a month on Match.com and yet again immediately regretted handing over the cash, as I have every other random time I’ve decided to take a peek during my extensive single years.  Same faces, same crap (I honestly don’t know why people bother paying, to say the same sh*t they could say for free on any number of apps).  Baffling, but hey ho, each to their own.

There was however, one chap I connected with (and by that I mean, he put me in his shopping basket and I put him in mine, not on any kind of spiritual level!) who seemed really rather nice and we went on a date, two weeks ago.  So far, so good.  Sadly, there was no, what we call here, ‘chispa‘, but I thought I’d go for a coffee with him the night before Copenhagen, and I was right.  No spark…. I suppose that his normalness and lack of any life experience and dislike of anything too far from the straight and narrow, was only highlighted all the more by the fact that my host in Copenhagen, was my ex.  A scientist, who’s travelled and lived in many places, with a sharp sense of humour and….. Yada, yada, yada.  You get the picture, despite being a big pain in my *rse, he set the bar WAY. TOO. HIGH.  I was visiting as a friend only, but nonetheless, it’s impossible to not make comparisons.

Mr Vanilla, viewed our one and an eighth dates as something more and expressed his profound disappointment that I had not let him know I’d arrived safely…. and more messages of a similar ilk followed while I was away.  Which, I have to admit, a little teeny weeny bit, got my GOAT.

I decided on day two of my trip that we wouldn’t be meeting again….. I seriously contemplated my first foray into ghosting, but having never done it before, and having been on the receiving end of that too many times, I bit the bullet and sent the, ‘it’s not you, it’s me’ text. 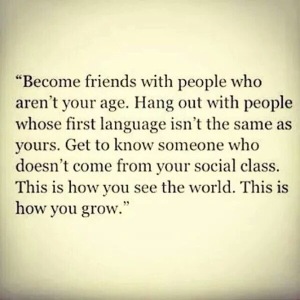 I got this back….. from a man who’s never lived more than four doors around the corner from his entire family.  So I guess that’s me told, good and proper.  I still don’t consider myself a fully formed adult it’s true, see previous post, but I do think that everything in the life lesson, I’ve done and am currently doing.  Unless I wake up tomorrow and it’s all been a dream….. But if it isn’t a dream, I will continue to live in the same manner as long as I am able.

There’s nothing at all wrong with liking what you know and knowing what you like, and there’s room in the world for everyone, and I think I was very polite in my approach to no more dates; he just wasn’t for me.  I certainly wouldn’t have  dreamt of saying, ‘you need to get out more!’  So I just sent an equally polite response to his advice, as my initial message, allowed him to send a string of rambling follow-up messages about how we weren’t right for each other and it wasn’t our time, (one date dude, one date), sent a simple smile emoji (SO twenty first century), and wished him all the best with everything.  Instead of giving him short shrift and pinging his message right back at him with a ‘you should heed your own advice mate!!’

Actually, maybe I don’t give myself enough credit and I am growing up, after all.  Yeah……… maybe I am.