….. is all it’s going to be I think. Inevitably, I have logged into trusty old Tinder, to see who’s about, (and to get a little boost for my ever-so-slightly bruised ego). Obvs. #sorrynotsorry. And it really is just that. Yes, I loved Mr C, but I don’t know if it’s an age thing, but it feels like it gets easier and easier to deal with the disappointment of failed relationships. And quicker and quicker to feel almost normal again; without the dull ache of memories and wishful thinking, gnawing at your gut.

I was not at all surprised to see a slew of familiar faces, some of whom I have encountered on various different platforms and, from six years ago when I first arrived in BCN. Have they been there all this time, or like me, tried and failed a few times? I suspect the former. Cynical, me? It’s something I have pencilled in to talk about with my lovely therapist after the Christmas holidays. My disdain for men seems to also grow easier by the day – especially when someone’s opening gambit is, ‘want fuck me?’ Eehhrrmm, I’ll pass thanks. You old charmer, you. And: excuse me sir *adopts haughty air* but please don’t assume I DON’T SPEAK SPANISH! Damn this typical British look.

Anyway, things I look for in a profile are:

Not a photo of a wolf (any other savage animal)

Eyes. Call me strange, but I’m partial to a man with eyes. They’re also practical and help you see all 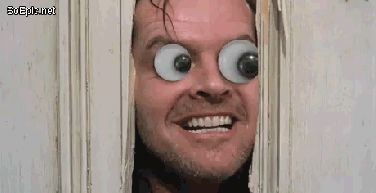 the stuff. Where are your eyes. No eyes, no replies! (Also: poetry) If every photo is in sunglasses, then I’ll assume you have epic conjunctivitis, or the look of Marty Feldman. No. Next.

Not all your photos are of submissive women. They’re out there, they exist but I ain’t one of them.

A profile full of photos of you, not none of you and then also one is Woody Allen. I’m going to assume the worst. Dude, the man’s a (suspected) paedophile. Seriously?

Not a man who spends his time dressed in combat fatigues/camouflage and hides behind trees and in bushes, with firearms, (in every photo). Chances are I’ll probably report you. This screams: ‘I am dangerous and violent.’ And danger and violence are your only hobby. I think, anyway. Maybe I’m wrong and it translates to ‘I’m a doctor without a border and in my spare time I run a pet rescue centre’. Maybe I really am cynical.

Ditto: photo of van, followed by you in a balaclava. This says, ‘I will kidnap you, then murder you.’ Probably.

So, ultimately I think three significant heart breaks is enough for anyone in a lifetime…. especially when that spans almost twenty years of said life. And truth be told, I’m really rather enjoying reclaiming my spare time, as actual spare time. It’s been blissful, because all I want to do is be snuggled up in my new gaff. And so, when Sex Tuesday stopped happening (I know, so romantically like clockwork, right?) I kind of started enjoying being at home alone again, doing the domestic stuff, exploring the neighbourhood, or simply being. With my music and a book. Like I was before my last relationship, for three. whole. years. I was kind of ok with it then too, with the occasional date here and there, and the occasional French boy here and there. And Italian. And come to think of it, Welsh (weird coincidence) and local…….

But enough of that. I think I’m going to take the executive decision to come clean with the couple of chaps I’ve been talking to, and explain exactly that. Make my apologies and get the hell out of Dodge. Christmas is just around the corner and a week with family and friends. And a brand new, shiny year is twinkling on the horizon.

Who needs dates, when you’ve got all that to look forward to?