…. like we need that weird pair gloves from the Innovations Catalogue, made of towel, that are redundant, because you know: towels.

Yep, it’s that time of year again, when we gaze longingly into the jeweller’s window, surreptitiously glance at the overpriced heart-shaped menu as we pass the restaurant, and are bombarded with guilt-inducing images of hearts/flowers/insert other red coloured cliches here.  It’s well-documented that I am, in general, not a fan of schmaltz or public face-sucking or fondling, so to Valentine’s, I still say – Bah!

But……. I have been seeing someone for three months now (I know!  Right?), and obviously I’m still waiting for him to rip his own face off, cackle wildly and reveal the philandering fuckwit within; because life has taught me well (or made me cynical, depending on your point of view).  But for now, it’s really quite lovely….. in a late-forties, ‘we know what this is all about’ kind of way. *waves hands in general direction of all the earth and life and the universe *.   There has been no chorus of angels – unless you count the drunk chap outside my bedroom window at four am this morning, literally called Angel. (Thanks Angel’s mates for matching his dulcet tones with your hollerings for him to ‘Angel!!  ¡VENGA!’).  There have been no Cupids fluttering around firing arrows, desperately trying to shoot amor directly into my heart, (and if there have been, they’re a lousy shot), no sound of violins drifting on the balmy breeze.  It’s freezing and blowing a gale.

There have however been walks, lunches, flowers, movies, dinners and chats about life, his teenagers, work and the pain in our neck/knees/shoulders etc. etc.  Who ever said romance was dead?   I almost feel like a proper grown-up. 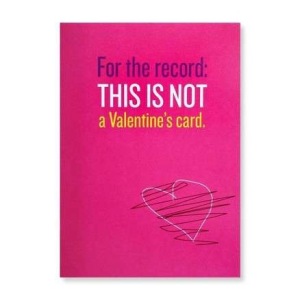 So happy ‘generally being a nice human’ day, to ‘I like sharing time with you’ day, to ‘it’s so good to be able to share my news with you’ day, for ‘holding my hand and kissing me (and the other stuff) whenever we see each other’ day.

And having said all that, just for the record:  there will be silk or lace or a combination of both.