Well…… I’ll be.  Even I haven’t been able to act the clown I usually am, and make funnies these last few (very significant) months.  This has proven a problem for someone who mostly writes about nonsense and shenanigans – oh, and not being a mother. (Which for me, are in fact intrinsically linked).

The world’s gone stark raving, bloody mad and as a result I’ve lost my way a bit – both personally, and here.  To find funny words to write about silliness and irrelevancies, seems like a massive, disrespectful disservice to….. well, to just about the entire world.  Who can find the laughs in UK war threats to Spain over Gibraltar, Nigel Farage still being interviewed on telly and Donald Trump (a serial sex offender) launching Sexual Assault Awareness Month.  No really, it’s a serious question.  Anyone?

I pretty much hit rock bottom in the Autumn of last year, when I finally folded and went to the doctor about my ever present black cloud.  I recognised the familiar blue feeling, but I did not like that it hadn’t ‘blown over’ in a month or so, as it usually did.  I discovered then that I was suffering from quite severe anxiety.  Being a Brit, completely unable to be honest about emotions and/or illness, even when I was shaking and crying in the surgery, I was saying; ‘yeah, no, I’m ok you know, in general.‘

So, sadly (or not, depending on your point of view), there has been significant radio silence for some time, which has been quite difficult to overcome….. There has however, been plenty of ranting over at Twitter.  That part’s been easy, there’s just been so much stuff to rant about.  If there was a gold medal for current affairs ranting, I’d be in a dead heat with – approximately a gazillion other people around the globe, all ranting in unison.  And to edit your ’emotions’ into a hundred and forty characters, suits me just fine….. 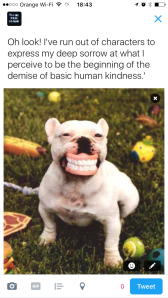 So, with the good ship Brexit well and truly sailed on Wednesday 29th March (look at me successfully skimming over that epic shower of shit), and no clear sign of an impeachment of Trump any time soon – I’m attempting to significantly reduce my consumption of news.  Torn between an adult thirst for knowledge and trying to keep up with current affairs; and deep rooted desire and necessity not to find myself in a molten heap of melted brain, kind of predicament.

So I’m hoping that with a sizeable reduction of the intake of worldwide political idiocy and other bad news stories, I can and will ease myself back into writing this blog more frequently again…… You know, it almost feels a bit like getting regularly laid after a significant dry spell, knowing you could well throw a hip out with one, unexpected flip – because you haven’t done your Bodycoach warm up.

There’s still plenty of naughtiness and shenanigans left in the old bird yet, and it will be here again soon.