Taxi duties. As is documented quite well in this blog, I am a big fan of me time and relaxing at home. Like….. a big, big fan. BIG. ENORMOUS. It is also known that I possess a large array of ‘house trousers’, a term coined by my good friend MonkeySpangles over in the Twittersphere, an expression and clothing item that I have wholeheartedly embraced. Once I’m in, I’m in, if you know what I mean. Both the house trousers and the house. I make a mental inventory of what I have in the house and strategically plan what I need to buy en route to the house, to ensure that I don’t have to leave the house again, once I eventually arrive there. I’m quite proud of this skill.

This week, and last week, a student arrived for class at 8am on Monday morning, shattered from his weekend. Muy cool, you may think. But alas, as he explained to me, the reason was not that he had been for a romantic dinner with his wife, partaken of a few too many gintonics or been dancing into the wee small hours. No, what had indeed passed was that his seventeen year old daughter had gone to the disco with her mates and was requiring picking up at approximately 4am, both weekends. 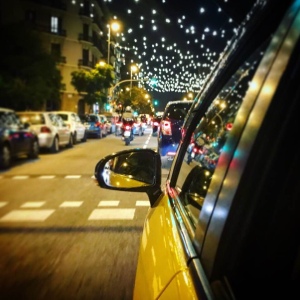 For a moment I cast my mind back to my youth. (Say. NOTHING.) Somewhere in the murky depths of my memory, was Blaise’s, the under-18 disco in my home town. Also lurking there were the hours of the disco; 6pm-10pm. Also, was one memory of my father telling me to be ready and downstairs at half six if I wanted a lift there. I came down at 6.35pm and was promptly told to organize my own way there. I vaguely remember calling a friend to go with her and that my mother always, but always came to get me. Can you imagine their horror if I didn’t leave the house until 11pm and needed a lift at 4am? Well, it simply wouldn’t have happened. I wouldn’t have had the permission in the first place.

I would absolutely hate to have to get dressed and get in my car and drive half an hour at three in the morning. Safety is paramount, especially in this day and age, so I would be obligated to look out for my young; and as you know, I’m not a big fan of obligation either. I’m just about getting my head around needing to go home for the cat, and if I’m a little late – I know he’s not going to get murdered on the streets. So there would be only one answer to this situation ……….. a blanket ban on any nighttime fun. My kids would hate it.

A profound love of house trousers, being in after a certain hour, not needing to leave the house if it’s not absolutely necessary and having no responsibility for anyone’s safety, is my ‘reasons why I don’t have kids’ #72.